I acquired the following from CNSNews. 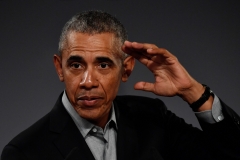 On his nationally-syndicated radio show on Thursday, conservative host Mark Levin contrasted the coronavirus pandemic with the Obama-Biden administration’s response to the 2009 swine flu epidemic, especially its decision to stop testing.

Levin replayed a C-SPAN clip from May 2019 in which Ron Klain, a former chief of staff for Biden, says that the Obama-Biden response team “did every possible thing wrong.”

We had a bunch of really talented, really good people working on it and we did every possible thing wrong and 60 million Americans got H1N1 in that period of time.”

“The rationale given for the CDC guidance to forego testing and tracking individual cases was ‘why waste resources testing for the swine flu when the government has already confirmed that there is an epidemic?’”

This site uses Akismet to reduce spam. Learn how your comment data is processed.

The Ads that appear below any given posts are NOT of my choosing. I am allowed NO input as to which ads appear. Please do NOT think I am endorsing any product or service you may encounter in any of the ads appearing below my articles. Neither do I receive any compensation for the running of these ads. Blessings Friends!

Follower of Christ. Wife, Mother, Grandmother, Great-Grandmother. Some call me a teacher. Some say I'm a prayer warrior. A few accredit me with some writing skills. Me? I say I'm a work in slow progress, looking for perfection in eternity and until then having all the holy fun I know how.